What everybody wants to know about Shawn Shultz 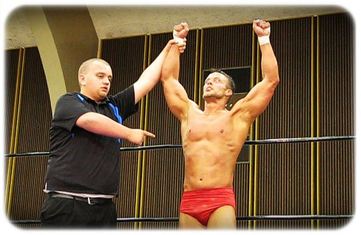 Shawn Shultz made his debut in Ocotber of 2000 in Clinton, TN.  Shawn Was trained  by Scott Bishop a who was a shooter turned pro.  After just 9 short matches Shawn suffered a serious injury to his shoulder that required two surgeries and put him on the shelf for four and a half months.  "He came back a totally different person and wrestler!" claimed his trainer Scott.  Shawn made his way to Nashville, TN shortly after making his return and met up with several different people who helped mold him into who Shawn Shultz was going to become!  People such as Bert Prentice, Chris Michaels, Chase Stevens, Tracy Smothers.  "I would be a totally different person if it wasn't for the people I met after coming to Nashville!" says Shawn.  Nashville also allowed Shawn to be in and around TNA. Shawn never limits himself to one place, while Shawn made his base in Nashville he started traveling the entire United States trying to find his break.  He finally became a part of something that seemed to be a huge break for him and many others. NWA Rockytop started in the summer of 2005 in Knoxville, TN. Rockytop allowed many young and up and coming stars to work with a lot of already legendary superstars of wrestling.  Rockytop is where Shawn began a student/teacher relationship with Dr. Tom Prichard.

After picking up tricks of the trade from Dr. Tom, Shawn had his first chance to be a part of the WWE. Shawn did a Monday Night Raw taping and then later that week traveled to Atlanta, GA and started working with the WWE developemental company Deep South Wrestling.   "I honestly learned so much about tv matches and how to work cameras." Shawn confesses.  Bill Demott was the head trainer in Deep South in Shultz's first 2 stints there until Dr. Tom was placed as the head trainer during Shawn's third and final visit.

Besides the interaction with the 2 biggest wresling companies in the U.S.A Shawn has done several other things that he stated that he was very proud of. He was in the movie about Sting's life, he has done a model shoot for Nashvillerocks.com, and wrestled and became friends with several guys that he says he idolized growing up.  "I mean hell I have wrestled Dr. Tom Prichard, Bobby Eaton, Tracy Smothers, Ricky Morton, Buff Bagwell, and Jerry Lynn and I get paid for it. I can't ask for a much better life!" Shawn proclaims.

Over the last few years Shawn has dominated the world of independent wrestling and Shawn has made several appearances in TNA and WWE has extra talent and in tryout situations!  "I want to always make sure my face and name is fresh in the mind of everyone that needs to know me!"  Says Shultz.

Create your own unique website with customizable templates.
The Shawn Shultz Brand (c) 2013